In 1985, pop artist Andy Warhol made a portrait of Blondie singer Debbie Harry on a Commodore Amiga. We must go back to the year 1990 for our first experiences with computer games on floppies. The frantic and often futile attempts to shoot an almost square ball with eleven, angular players into the nets had something of a fight against chance. Hans Verhaegens Game (2005) perfectly accommodates that memory: “The animation refers to a football game, there are scores, you have two teams, some rules and a referee. It has everything a game should have, but there is nothing to play. You can only watch.”

When we enter the flat on the second floor of a house on the edge of the Elizabeth Park in Koekelberg, Hans Verhaegen (1966) says that he will soon show his real studio. His artistic practice does not happen in the tangible, with light-flooded room he shares with his wife Petra, and her Shoetuning studio. Besides closets completely full with older work – paintings, collages, prints there is a nice, big desk which shows off his laptop as Wunderkammer. Hans Verhaegen, born in Ghent came in 1989 to study at the university (VUB). He lived for a time in Saint-Gilles, behind the church, and then moved to the center, where he stayed eighteen years in the Rue Léon Lepage. His studio there was the opposite of the room here: “Everything was stacked in the height. This apartment is horizontally oriented, there flows much light in, and everything is spread out in space.”

Verhaegens true studio also contains the spirit of expanding horizons. His work is like a universe of mutually interlocking work, a network which provides ideas for one another. One of the things that binds the works is chance. It prevails in the codes that he wrote and lead a life of its own. 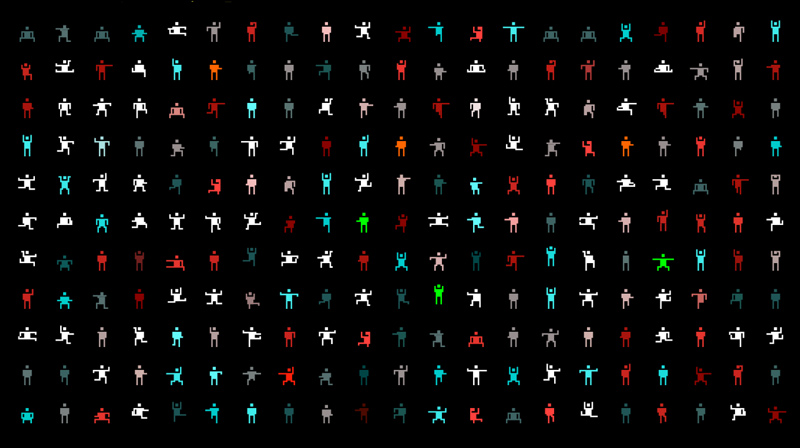 “Take 128 people (2003). The computer places 128 people on a screen, completely random, and then selects a dance out of a library of fifty dances. Then the computer decides who is dancing what and when. In principle it is possible that the people perform the same identical dance synchronously, but I think you’ll win the lottery faster. This random nature is very important to me. What you see now, you will never see again in exactly the same combination. It is the same with for example Sue (2012), a series of digital prints of people who are inextricably slid over each other which results in an abstract ‘painting’. I will never get that same constellation again on the screen. At the launch of the digital art project by Kunst in Huis in the House of the Future in Vilvoorde, I had an animation installed in one of the rooms. When I left the day after the installation, the communications officer said that she hadn’t slept well that night. She felt that she was missing everything. This idea of an animation with images they she would never see again, made her restless. (Laughs)” 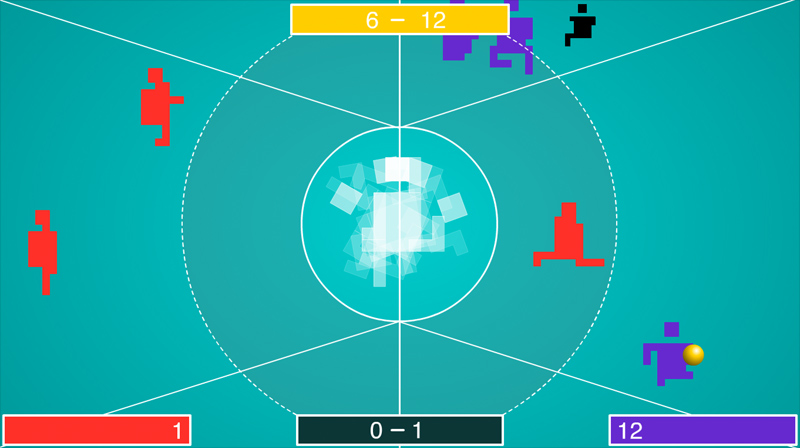 The autonomy of the digital program and the people it is controlling is only part of the coincidence that Hans Verhaegens work typifies. “You’re only human. If you’re just at work and someone is coming in, or you’re hungry, or your eyes hurt, then that affects what you’re making. Then you look not for the perfect solution but a solution within a particular context, at some point. This is no different from when you work as a painter. A painter can also get the hiccups so his hand slips, or the paint can create a drop trail that was not planned. “It is not the only time Hans Verhaegen refers to painting. 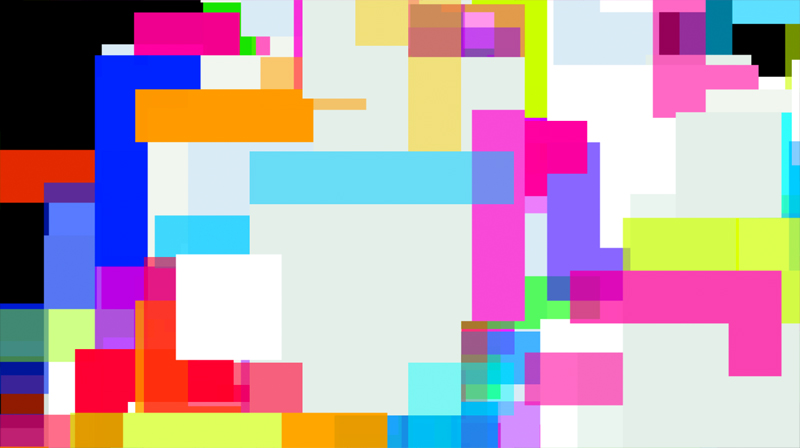 The animation PM (2008) can be seen as a tribute to the Dutch painter who was at the basis of the Neoplasticism: “A painter is also working with technology. I often ask myself to how twentieth-century artists would have made use of the new technologies. Piet Mondrian for example would have certainly exchanged his paints and adhesive ribbons for a computer.” 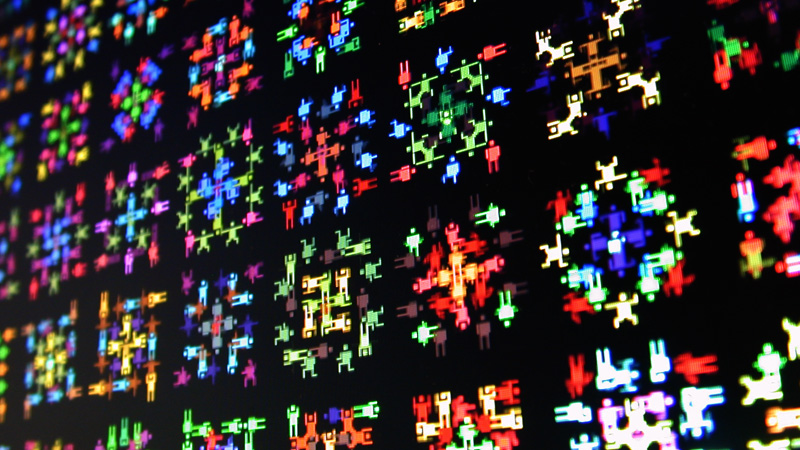 The idea behind ‘Deus Digitalis‘ (2009), an impressive animation based on ’128 people’ and combined with music by Jean Delouvroy, was created after a visit to the Cologne cathedral. “I had seen the stained glass by Gerhard Richter, and I really wanted to recreate it somehow in a digital form, with my people. The animation is, with all those dancing people, very nervous, while the music is just so low in tone, that it surrounds you, like being wrapped in a blanket. Nervous and soothing at the same time. I have heard many interpretations of that work. What people see in it, doesn’t really matter. I just wanted to make a Gothic window. You had Buddhists who thought to recognize choirs in it. Which is quite true, because Jean composed a fugue with amongst others a certain delay applied on it. But you also had the people of the Loyola University Museum of Art in Chicago who really saw it as religious art of this era. And when we showed it in the UK, at a music festival with 20,000 people, in a small, darkened room, some people saw only copulating people, others even just swastikas.”

In his work Verhaegen can combine two recurring art concepts: “On the one hand you have the concept of originality: a painting is unique, and sometimes the uniqueness sets the value. Another concept is – think of Andy Warhol – the reproducibility of the art, production like in a factory. Through the animations I can combine both concepts. The random factor dictates that a computer animation will never produce the same result. On the other hand I can easily produce or print unique files based on the same animation.”

You would think that all these digital applications would have an effect on the subject of Verhaegens artistic practice. Nothing is less true. “If you were to ask me what my work is about, I would say: that like all art, it is about mankind. I do nothing else today than these humanlike figures. They have become quite by accident actually, my basic lego. After a year I found myself doing nothing but these people. They are so simple. Only ten blocks, and you can rotate, color, change transparent or even make completely unrecognizable, but in essence they remain the same people. Sometimes you yearn to try and draw something round. (Laughs) But then I just try to make something more organic. I used to hate sharp corners, and now my work is full of that kind of geometry. But the way the figures are combined, there is something very organic and lively about them.”

An extreme form of that concern to the organic nature of his work can be seen, for example in the series of computer drawings under the name ‘Fresh‘ (2010). “If you look closely, you see again those people, but programmed so that they leave some kind of trace behind. You start with a white sheet and a dozen people move randomly across the screen. The result is ambiguous. When I showed these drawings for the first time, people asked me which child I had been drawing here. It is as if I made the computer draw like a child. ”